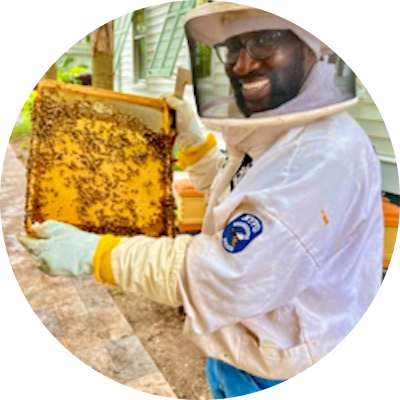 I joined the NYPD on July 2, 2001. I worked as a beat cop for 20 years, primarily patrolling NYC borough of Queens. I became the official beekeeper for the NYPD in the Fall of 2013.
I got into beekeeping after making fun of a friend of mine. I went to his house a few weeks after he got his bees and became interested myself. Growing up in South Carolina, I remembered knocking over a couple of hives in an apiary as a young teenager. As a future beekeeper, I realized how stupid that was.
As a beekeeper for the NYPD, I had the task of removing swarms from all 5 boroughs of NYC. I removed countless swarms from Times Square, Staten Island Ferry and Yankee Stadium. After wrangling many swarms throughout my police career, I decided to retire on August 30, 2021 to spend more time with my family during the Spring and Summer months. Now that I'm fully retired, I manage a dozen colonies with the hopes of expanding to a maximum of 50 colonies.

Imagine responding to every emergency call into 911 about swarms in New York City - across all five boroughs, including Times Square!  Well, imagine no more because, today’s guest, Darren Mays was the Official beekeeper for …